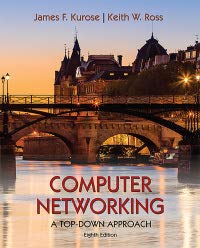 “Welcome to the eighth edition of Computer Networking: A Top-Down Approach. Since the publication of the first edition 16 years ago, our book has been adopted for use at many hundreds of colleges and universities, translated into 14 languages, and used by over one hundred thousand students and practitioners worldwide. We ve heard from many of these readers and have been overwhelmed by the positive response”

Unique among computer networking texts, the 8th Edition of the popular Computer Networking: A Top Down Approach builds on the authors’ long tradition of teaching this complex subject through a layered approach in a “top-down manner.” The text works its way from the application layer down toward the physical layer, motivating students by exposing them to important concepts early in their study of networking. Focusing on the Internet and the fundamentally important issues of networking, this text provides an excellent foundation for students in computer science and electrical engineering, without requiring extensive knowledge of programming or mathematics. The 8th Edition has been updated to reflect the most important and exciting recent advances in networking, including the importance of software-defined networking (SDN) and the rapid adoption of 4G/5G networks and the mobile applications they enable.